Generating a random value with a custom distribution
Programming.Guide

Generating a random point within a circle (uniformly)

For a circle of radius R you do:

where random() gives a uniformly random number between 0 and 1. 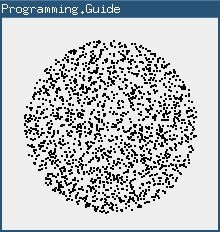 Let's look at the math that leads up to sqrt(random()). Assume for simplicity that we're working with the unit circle, i.e. R = 1.

Since the circumference of a circle (2πr) grows linearly with r, it follows that the number of random points should grow linearly with r. In other words, the desired probability density function (PDF) grows linearly. Since a PDF should have an area equal to 1 and the maximum radius is 1, we have

So we know how the desired density of our random values should look like. Now: How do we generate such random values when all we have is a function that produces values between 0 and 1?

We use a trick called inverse transform sampling. An intuitive explanation of how this method works can be found here: Generating a random value with a custom distribution.

The CDF is, as the name suggests, the cumulative version of the PDF. Since we're working with reals, the CDF is expressed as an integral.

Mathematically this boils down to swapping x and y and solving for y:

And that's where sqrt(random()) comes from.