Big O notation is a convenient way to describe how fast a function is growing.

When studying the time complexity T(n) of an algorithm it's rarely meaningful, or even possible, to compute an exact result. Typically we are only interested in how fast T(n) is growing as a function of the input size n.

For example, if an algorithm increments each number in a list of length n, we might say: "This algorithm runs in O(n) time and performs O(1) work for each element". 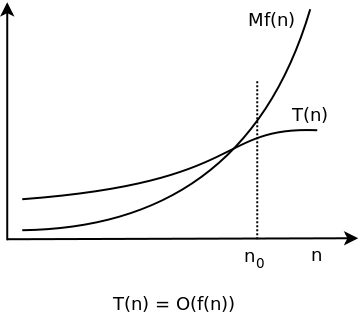 According to the definition this means that there are constants M and n0 such that T(n) ≤ M when n ≥ n0. In other words, T(n) ∊ O(1) means that T(n) is smaller than some fixed constants, whose value isn't stated, for all large enough values of n.

An algorithm with T(n) ∊ O(1) is said to have constant time complexity.

An algorithm with T(n) ∊ O(n) is said to have linear time complexity.

Big Omega is used to give a lower bound for the growth of a function. It's defined in the same way as Big O, but with the inequality sign turned around:

Big Theta is used to indicate that an function is bounded both from above and below:

When analyzing algorithms you often encounter the following time complexities (in order of growth):

In fact, O(n log n) time complexity is close to linear: it takes roughly twice the time to solve a problem twice as big.

Algorithms with time complexity Ω(n2) are useful only for small input: n shouldn't be more than a few thousand:

An algorithm with quadratic time complexity scales poorly: if you increase the input size by a factor 10, the time increases by a factor 100.